Kanye West is reportedly set to release his ninth studio album titled Jesus Is King. Following on from his 2018 record Ye, the LP is due out this month of September, as revealed in a tweet by Kanye’s wife Kim Kardashian-West.

With songs including “God Is”, “Sweet Jesus”, and “Baptized”, the religion-traversing track list is very en-brand for Yeezus himself, whose weekly Sunday Services see the rapper sing gospel renditions of classics such as Nirvana’s “Smells Like Teen Spirit” and reworked versions of his own music. The sessions have attracted a host of famous visitors, such as the entire West/Kardashian/Jenner clan, Diplo, Rick Rubin, Paris Jackson, Katy Perry, Tyler, the Creator, and Kid Cudi.

The mysterious and long-awaited Yandhi, an album the musician has been teasing for a long time, remains missing in action.

Ye previewed “Water”, a new song from this upcoming album, at his Coachella Sunday Service performance. In the time in between, Ye has appeared on Tyler, the Creator’s “Puppet” and Lil Pump’s “I Love It”.

There is only a month until the album’s release, so let’s hope it doesn’t do a Yandhi and disappear completely.

“Jesus Is King” will be out September 27. 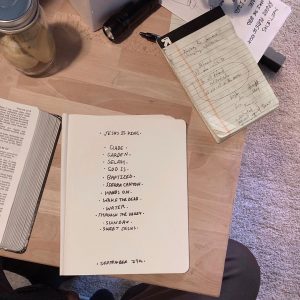 The Year of the Essence; Giving Big Wiz his Flowers

GOD NO GO SHAME US! OFFICER WOOS SHARES HIS JOURNEY AS HE COVERS THE OCTOBER DIGITAL EDITION OF SIMPLE MAGAZINE